Meaningful musings from our founder. | Sign up here to stay up to date.


I get asked a lot if I'm worried about the market. With occasional exceptions, the answer is no. It's not possible to control it, so worry has no advantage, and a well-structured portfolio should have downside protections built in regardless of market direction. I do worry about behavioral error. Behavioral error leads to incredible loss of wealth, and it is endemic in the investing population.

Right now, the biggest behavioral error I see is that people have too much cash sitting around. Cash does nothing for you as an investor, except almost guarantee that you are going to lose. It almost certainly will not have the long-term returns of the stock and real estate markets, and it does not afford the protection of certain types of bonds.

A secondary worry is inflation. Inflation is enemy number one for the investor, even though most people don't perceive it as such. It's quiet, but it erodes real returns. Some asset classes tend to do well in inflationary periods. For example, real estate investment trusts. Over the past year, REITs, like homeowners, have been able to refinance much of their debt into lower cost obligations. And then inflation sets in, and they can raise rents at a faster pace, and at the same time, their cheaper debt becomes doubly cheap, because the debt is a fixed contract, and it's easier to pay back with more plentiful dollars that are now worth less.

Are we in a bubble? I don't know. Maybe. But if we are, I'm going to go out on a limb here and say we're not at the end of it. You know I've said many times that no one can predict the market short term, and that's still true, but experience does give insight into patterns. Bubbles generally end when investors don't think they can lose money, when people wonder why they are going to work when their neighbor is day-trading, and when Jim Cramer swings the chicken so wildly things break on the set. To some degree, because rising markets fuel consumption, the cycle can spiral upward for some time.

Keep in mind this graph. I would guess we're in the Excitement stage: 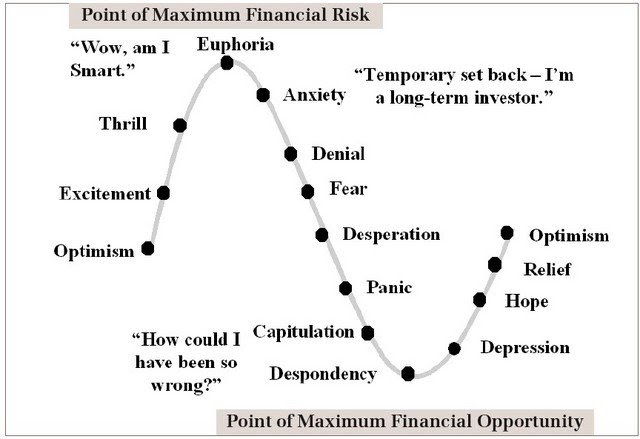 “Amazon had space on ships and I couldn’t say no to anyone,” says David Knopfler, whose Brooklyn-based Lights.com sells home décor and lighting fixtures. “If Kim Jong Un had a container, I might take it, too. I can’t be idealistic.”

I hope you had a nice Thanksgiving and are enjoying the leftovers.


It's way more fun to pretend you know something about computer science by talking about Ethereum and byzantine fault tolerance and chaincode than it is to actually debug a compiler. There's a lot of that going around, and now it seems computer science got mixed with money. Let's look at a couple of things.

Let's start with Squid, a cryptocurrency that trades on Pancakeswap. I want to be nice, because it's never fun when an investment goes to zero (unless you're short I guess), but the digital token Squid went from $2,856.65 a token to $0.0007 five minutes later. Days later, not content with that collapse, it added five more zeros to the right of the decimal point. At least the names are creative. I mean "Pancakeswap" - come on, that deserves some credit.

Turns out Squid was a scam, but who knew? Maybe some of these things aren't scams, and they'll have great returns as legitimate players pile in. Some of them may be foundational technologies as opposed to a proxy for people's worries about inflation. For example, if you click through to this page and scroll midway down, you will see a column on the table on the right that says "Blockchain." This is one of the better layouts I have seen describing the evolution of the ecosystem.

There are other financial technologies that are interesting. Buy Now Pay Later is one of them, as it may disrupt the duopolistic credit card issuing banks. Instead of a credit card, a manufacturer can issue the credit directly to the consumer, and make money on the financial trade. Maybe the margin in manufacturing creeps toward zero, and the firms make their profits by becoming financial lending companies. There are lots of tech firms getting into this space, and their shares don't trade on Pancakeswap.

Investing isn't baseball. You don't have to swing at these things, even if you think they might be good. In baseball you can't forever ignore pitches that you don't like, at some point you have to swing if it's in the strike zone. In investing, you can just wait.

When you're an investor, it's critical to have enough confidence in the asset that if the price drops a lot, you will buy more of it, and certainly not sell it. If the asset doesn't garner this confidence, let it pass.


A lot of you are asking about Fiduciaries. This arcane word has broken through to the public lexicon. The financial industry is using it in complex ways, and we couldn't find a simple explanation online, so Caroline, Jayne, and others here wrote one for you. I encourage you to click through and read it.

Out of college I found myself going to a lot of rich people's homes, trying to convince them to invest in my startup. I went to their offices too, explaining that the Internet was a big thing. Their secretary would print their email out for them to read and after getting over that shock I would say a lot of stuff that I thought was incredibly convincing and eventually they'd ask something like "isn't Microsoft going to crush all of these businesses" and I would say "no, no it's very different from PCs trust me" and they would say "I love what you are doing but I don't love it enough to write a check." (Well, eventually some did.)

It was odd to me that all these successful people couldn't see this, but then I found computer scientist Paul Graham, who was about to go bankrupt with his Viaweb startup near me, and he was definitely on it. He was also writing some essays and posting them online, and I have referenced them ever since.

One of those essays, in 2004, discusses wealth creation. Graham got better editors after 2004, and this essay wanders a bit, but he makes two great points:

1. Wealth is the products and services that people want, and businesses get money by creating, or reacting to, the desire for wealth. It's noteworthy that the most valuable forms of wealth (love, friendship, faith) do not have transmissibility to money.

2. Wealth is not a fixed pie. The analogy Graham uses is working on an old car in your backyard on the weekend. If you spend your summer weekends fixing the car, the total aggregate wealth in the world increases.

Key takeaway: when you think about the world this way, the equity market appears attractive, because more than other markets, it reflects wealth creation, and wealth is what humans want.

Since 2004, wealth disparity has increased, and most of the disparity has occurred in the very high end of the curve. Several things converged to make this happen, among them:

1. The disruptors were not about to get disrupted themselves. When I worked for IBM in college, Lou Gerstner had taken over running the firm, leaving Nabisco for the job. The engineers called him the "cookie monster." The entrepreneurs running big American tech today are not cookie monsters, and they are applying a ferocious cocktail of engineering talent and modern management to problems. They are, in effect, disrupting themselves.

2. The Internet created network effects that led to natural concentrations. Due to the Matthew effect in economics, networks favor the dominant player. For example, local newspapers in every town succumbed to mighty global ad engines that could now reach both Chester, Vermont and Maysville, Oklahoma at the same time, and do so at almost zero incremental cost. The Uber network works better at large scale, etc. In rural America, Revenge of the Nerds went from a funny 1980's movie to taking away your parent's job.

We'll have to discuss how to tax this stuff later. Stay tuned. Strap in.

1. Viaweb escaped bankruptcy and sold the firm for a lot. It became Yahoo Store. He then started Y Combinator, which invested in little things like AirBnb, Uber, and Reddit.

Contact One Day In July
How We Are Different
Low-fee index funds. Transparent & fiduciary financial advisors.
Local Financial Advisor
We are in your community. We are local.
Investment Management
We tailor to each client. Index funds at the core.
Index Funds
Broad market exposure, low expense.
Dan's Corner
Meaningful musings from our founder.
Fiduciary
Your best interests are our priority.
Low Fees
Our fees are among the lowest in the nation.
Financial Planner
Financial advisor optimizes your financial picture.
U.S. Treasury Bonds
Use Treasury Bonds to reduce risk.
Book Recommendations
Here are some of our favorites.
Inflation
What is inflation, and what causes inflation.
When Should I Invest?
Life transitions = important financial decisions.
Retirement: 401k and More
Retiring? Plan the future you want.
IRA Rollovers
401k Rollovers. IRA Rollovers
Active vs. Passive Investing
We believe there is a winner in this debate.
The Investment Process
How we work: low-cost index funds, personalized attention.
Simplicity
Simplicity is the ultimate sophistication.
Investing: What to Focus On
Low-fee index funds. fee-only advisor.
Switching Financial Advisors
Can be uncomfortable, but an important step.
Advisor Recruiting
We attract top-tier talent. Not your usual firm.
Basic Investing
Let's start with Investing 101.
Understanding Your Financial Statement
Let's break it down to basics.
Taxes on Investments
What causes taxes within your investments?
Behavioral Economics
The less emotion, the better.
Timing the Market in 2020
2020 - a case study in the futility of market timing.
How Financial Firms Bill
Fee-based vs. fee-only, and lots more.
Who Supports Indexing?
Bogle, Swensen, Buffett, and others.
Transparency
One click to see our fees.
Mutual Funds vs ETFs
Clarifying the difference.
Does Stock Picking Work?
The research says no.
Countering Arguments Against Index Funds
What happens in a down market?
Annuities
Lots of fees, little clarity.
How Do Mutual Funds Work?
Invest in the basket.
How to Relieve Financial Stress
New client? anxiety is normal.
Financial Terms Glossary
Common investment terms you should know.
Firm Comparison
One Day In July vs the competition.
Retirement Investing
Retiring? Let us help.
Accounts We Manage
We manage a wide range of investment account types.
Pay Yourself First
Saving and Investing for the future.
Investing an Inheritance
Prioritizing and planning for the future.
Frequently Asked Questions
Good questions, real answers.
Women and Investing
Your voice needs to be heard. We are listening.
For the Business Owner
Choosing what's best for your business.
Environmental Investing
Carbon intensity, fossil fuels.