How to take lots of money from average Americans. A primer.

The arrogance from big financial firms toward the average American is astounding. It's not every case, but we see practices directed at working people, trying to save and invest, that just shouldn't exist.

Let me discuss two of them today. You may have read that Morgan Stanley is buying E-Trade. CNBC wrote a summary of the deal, and deep in the article, this paragraph appeared:

But perhaps most importantly, Morgan Stanley will gain access to E-Trade’s $56 billion in deposits. In the past, the bank has struggled to raise deposits to fund loans to its wealthy clientele, relying on high-interest CD promotions (1).

Let that gem sink in for a moment. Morgan Stanley buys E-Trade, where many average Americans hold their money, to access the cash deposits so they can loan money and not have to pay higher rates on CDs.

I looked up the interest rate E-trade Bank is paying people for checking deposits, and it sits at either 0.00% of 0.05%. Not to be outdone, the E-trade Securities money market interest rate is 0.01% all the way up to cash balances of $500,000.

This, my fellow Americans, is the cash trade that drives the revenues and high margins of so many large financial firms. And many people don't even know they're paying it.

For the average person, sometimes big finance decides to skip the subtlety of the cash trade and just slaughter the account right out of the gate (2). Here's a good example that came in this week. If an account is not considered large, financial firms, in our experience, sometimes use legal though bold maneuvers to reach a certain level of billing. In the case of this week's proposal from UBS Warburg, a fund, ACSCX, carried a front-end load of 5.75%, with an additional yearly expense of 1.50%. Here is the data from Morningstar: 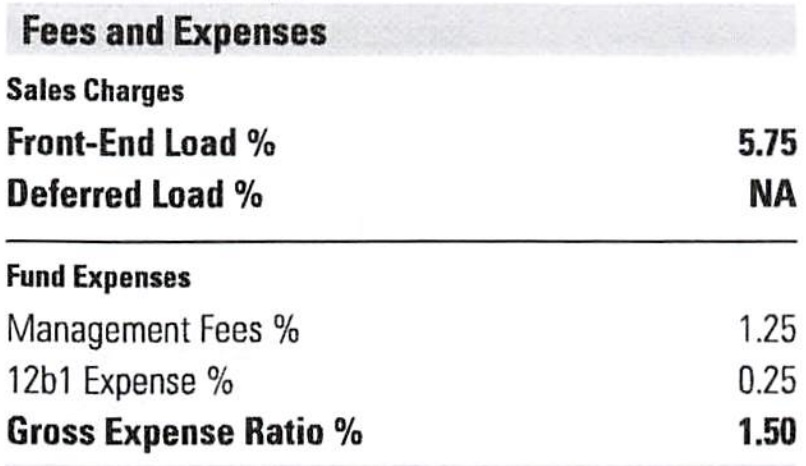 The comparative index fund in small stocks charge zero load, with a yearly expense of 0.10% (3). Not considering the opportunity cost of the client no longer having the money, and assuming UBS does not flip the funds around to bill more front-end loads, it would take the client over 72 years in the fund we choose to make up the fees UBS created in the first year (4).

To put that in perspective, 72 years ago was 1948. The country of Israel had just been created, and President Truman upset Thomas E. Dewey to win re-election.

There were many of these funds in this proposal, meant to increase aggregate billings for the firm while the investor suffered.

Paul Barry, who runs our Portsmouth, NH operation, pointed out this is not just behavior from Wall St banks. He sees some of the worst behavior from community banks and co-ops, a pattern we also see in other states. They use these same techniques. It's legal, yes, but it's wrong.

It's important to understand, and this comes from all of us here at One Day In July, that no client is put through a fee expansion process because of his or her financial standing.

(1) 2/20/2020
(2) The account is not actually slaughtered. This is metaphorical. But it's severely damaged financially.
(3) Comparison is to Vanguard small-cap value index.
(4) Not to pile on, but for all those fees, the example funds UBS recommended here, ACSCX, underperformed its indexing peer by 35% since mid 2010.