The predictable nature of unpredictability

Looking back on November, it's a great time to talk about predictability and certainty. November was a month that saw many of October's predictions, both in markets and U.S. events, prove erroneous. These were not long term predictions: even in the very short term, predictions of the future were wildly wrong.

One of the characteristics of the human mind is that it overweights recent events in importance: it does not have an averaging ability the way a computer or machine does. If the recent past seems stable, we begin to think that the future will be as well. If the recent past has been turbulent, turbulence is what we expect going forward. Our brains are wired to "drive in the rear view mirror" instead of looking out the front windshield.

But in a complex system, and global events are the ultimate complex system, the recent past will not predict where we are headed. The number of variables and uncertainties is *always* enormous.

I looked at the 2012 Berkshire Hathaway annual letter, where Warren Buffett writes:

"Of course the immediate future is uncertain: America has faced the unknown since 1776. It's just that sometimes people focus on the myriad of uncertainties that always exist while at other times they ignore them (usually because the recent past has been uneventful)."

Here is an example. This chart shows the S&P 500 over a period of roughly 5 years: 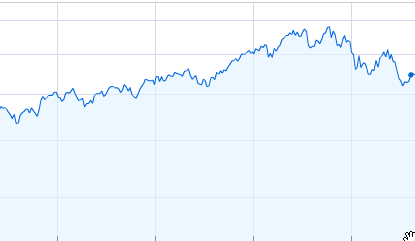 Seems ok, right? Going up, going up and down, nothing too unusual. This is the next few months added on:

These are graphs of the 2008 financial crisis. But right before that huge plunge, prognosticators were saying that bad real estate debt was contained to a small group of high risk pools, and the risk had been priced in. Except, in a hugely complex system, variables started to interact in ways no one expected, and a "black swan" (or low probability but large impact) event occurred.

The takeaway for now, as it relates to today: everyone is talking about how uncertain 2017 is looking. But the important thing for you to remember as an investor is that those statements regarding future uncertainty and unpredictability will *always* be true.