401K and 403B, Q1 Dividends, and the mechanics of why active managers almost never outperform

Two updates: One Day In July has formed a partnership to get into the 401K and 403B advisory business. I'm excited about this! In the array of products the financial industry has created, 401K/403B resides near the bottom, probably just above annuities. I have *never* looked at a plan I've been impressed with. They are constructed to almost guarantee employees don't make their fair share of market returns. For small and medium sized businesses and non-profits, we can now fix this problem. (Contact me if interested.)

To clarify, 401K/403B isn't bad for everyone. T. Rowe Price runs a lot of these plans, and the status quo is kind to them. There aren't many corporations in the nation that make a higher percentage of profit on sales. Their profits are north of 30%, or five times as high as the average corporation. Here's a graph of their income statement. (And btw, the recent decline is likely due to index funds taking share. We're making progress!) 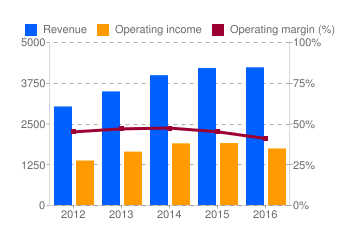 Second update: Q1 dividends have been announced for client index accounts. You will see them drop into your accounts in a week. Q1 has been an average season - dividends are roughly tracking where they were last year, with one exception. U.S. small stocks raised their dividends 42% vs last year. Before you tattoo "I love small stocks" into your forearm, keep in mind this is a quarterly number, and sometimes the payments time shift from one quarter to another. It will be the yearly result that we watch. That being said, a year-on-year 42% increase isn't bad. I like it when cash pours in.

People often ask why active managers cannot beat an index. If they are so well trained in finance, shouldn't it follow that they have an edge? And even if their training is mediocre, they're probably driving a really expensive car paid for by client money, so shouldn't that help? To answer this we need to look at what is going on under the hood of an index fund.

Let's say an index fund holds 500 companies. You see a little line or number dancing around on your statements, but that number actually represents the price of a share of stock in an actual corporation (unless you invested with Bernie Madoff, in which case it unfortunately didn't). The share of stock is a small piece of a larger business, and it represents a claim on the future earnings of that business. As an investor, you are deferring gratification today for a better result tomorrow.

If the future looks bright for that business, investors are going to bid up the price because they anticipate good years ahead. If the future looks gray, the price will come down on the share. Millions and millions of times a day, people and computers all over the world are voting on this price. Some of these people are very smart. Some could use to be a little smarter. But there are lots of votes.

You are not going to get Amazon.com at a cheap price as an investor in today's market. And you might think oil is cheap now, but when Elon Musk ramps up his factory this summer to start pounding out electric cars to the masses, you might see oil company shares get a lot cheaper as it dawns on investors that yes, oil's days are numbered. (Does your computer run on gasoline?). But then again, maybe not. Maybe plastics will replace the lost transportation demand.

Over time, this process turns from a voting machine to a weighing machine. In the short term the votes might be off, but in the long term the stock will get valued correctly. Professionals (and non-professionals) deceive themselves into believing they know something that others don't, that they understand why the price per share is off. Now, in some cases this might be true. But keep in mind that the active investor has to beat the index by a lot, because when the security is sold, the next rendezvous is with the tax collector, and Uncle Sam isn't going to be congratulatory. He's going to cut the gains down substantially.

While the investing professional might be right here or there, it is exceedingly difficult to be better than this group of smart and not-so-smart people over a medium to long period of time. If you look at why an index does well, out of the 500 companies 10 to 20 will drive almost all of the positive return for the year. To beat, you have to know that those companies are mis-priced before everyone else.

10 years ago Warren Buffett bet a hedge fund manager a million dollars that the hedge fund manager could not beat the market, using the average performance of 5 hedge funds he could select. Nine years into the bet, the passive index is up 85.4%, and the hedge fund manager is up 22%. And Buffett gave him huge advantages by not considering his outrageous fees or the tax headwind of his trades. If those were considered the manager would be negative on his scorecard. In other words, he'd be down roughly 100%.

To beat the market as a classic, human stock picker you have to do three things. One, you need to be right on your bets, and you have to be so right that you offset the tax effect. Two, your bets have to be different than others. In other words, you'll never outperform the pack if you pick what everyone else does. And three, your bets have to be hugely concentrated into a small number of stocks, which carries high risk.

For almost every professional that has ever crossed the entrance of a financial firm, that has proven to be impossible.

And yet, for the majority of Americans, this is how their money is run.

Return to Articles
How We Are Different
Low-fee index funds. Transparent & fiduciary financial advisors.
Local Financial Advisor
We are in your community. We are local.
Investment Management
We tailor to each client. Index funds at the core.
Index Funds
Broad market exposure, low expense.
Dan's Corner
Meaningful musings from our founder.
Fiduciary
Your best interests are our priority.
Low Fees
Our fees are among the lowest in the nation.
Financial Planner
Financial advisor optimizes your financial picture.
U.S. Treasury Bonds
Use Treasury Bonds to reduce risk.
Book Recommendations
Here are some of our favorites
Who We Serve
We work with clients nationwide from all financial backgrounds.
When Should I Invest?
Life transitions = important financial decisions.
Retirement: 401k and More
Retiring? Plan the future you want.
IRA Rollovers
401k Rollovers. IRA Rollovers
Active vs. Passive Investing
We believe there is a winner in this debate.
The Investment Process
How we work: low-cost index funds, personalized attention.
Simplicity
Simplicity is the ultimate sophistication.
Investing: What to Focus On
Low-fee index funds. fee-only advisor.
Switching Financial Advisors
Can be uncomfortable, but an important step.
Advisor Recruiting
We attract top-tier talent. Not your usual firm.
Basic Investing
Let's start with Investing 101.
Understanding Your Financial Statement
Let's break it down to basics.
Taxes on Investments
What causes taxes within your investments?
Behavioral Finance
Nudge vs. Sludge.
Timing the Market in 2020
2020 - a case study in the futility of market timing.
How Financial Firms Bill
Fee-based vs. fee-only, and lots more.
Who Supports Indexing?
Bogle, Swensen, Buffett, and others.
Transparency
One click to see our fees.
Mutual Funds vs ETFs
Clarifying the difference.
Does Stock Picking Work?
The research says no.
Countering Arguments Against Index Funds
What happens in a down market?
Annuities
Lots of fees, little clarity.
How Do Mutual Funds Work?
Invest in the basket.
How to Relieve Financial Stress
New client? anxiety is normal.
Financial Terms Glossary
Common investment terms you should know.
Firm Comparison
One Day In July vs the competition.
Retired Investing
Retiring? Let us help.
Accounts We Manage
We manage a wide range of investment account types.
High Net Worth Investors
Preserve and grow your wealth.
Investing an Inheritance
Prioritizing and planning for the future.
Frequently Asked Questions
Good questions, real answers.
Female Investors
Your voice needs to be heard. We are listening.
For the Business Owner
Choosing what's best for your business.
Environmental Investing
Carbon intensity, fossil fuels.