As arguably the greatest American theologian of the 20th century, I doubt Reinhold Niebuhr intended to be a capitalist. He wrote a prayer: "God grant me the serenity to accept the things I cannot change, courage to change the things I can, and the wisdom to know the difference." (If your spirituality doesn't include God, edit this to your liking.)

But Niebuhr's words are relevant to one of the central tenets of investing, which is control. There is nothing any of us can do, short of chairing the Federal Reserve Board, that can control the markets. On a deep level one has to accept this.

It's important to understand that a central tenet of the One Day In July model is that we acknowledge markets are not in our control. That is an underlying premise, and it's where we derive advantage. I have invested through two severe market crashes. Market crashes have a way of teaching you that the markets have a mind of their own.

But the control issue worries me a lot. It's not the markets that I worry about, it's that the perception of control creates a false reality in our clients' minds that a big market movement will eventually shatter.

Once an investor's version of reality crumbles, the negative effects pile up. Loss of confidence turns quickly to panic, and that leads to non-optimal decision making. Let me give you an example. In 2008 I owned an ETN in commodities. This was technically a debt note instrument though it resembled an ETF, and it was backed by a quasi-governmental Swedish bank (got that?). I was aware of this fact because I read the boring prospectus, but nowhere in my mind did I consider that a quasi-governmental Swedish bank could fail, and that if it failed, the entire investment could go to zero. This was a government that liked to tax, after all.

But that's almost what happened. As the sub-prime wreckage snowballed, I couldn't help but think I was in Alice in Wonderland - had the previous version of reality warped so much that everything except the United States Treasury was in danger of collapse? I thought I had more control of the situation than I did - a fringe edge case was bringing me to the proverbial schoolhouse, and the schoolmaster was in a grumpy mood.

As a sidenote, no ETNs for clients. I'll let someone else take the Nordic banking system risk.

The perception of control is enhanced by constant financial television, web sites, and phone apps that are streaming stock tickers and data. It's the sense that, if you watch it, you can control it. Max Planck, the great German physicist, would frown on this behavior, arguing that the act of observing something does not change the observed item in any way.

Let's loop back to Niebuhr's prayer. We know we can't control the markets, but we can control our behavior in observing them. There is a saying in financial research circles that "A watched portfolio never performs." Note in this graph that almost two-thirds of the gains an investor could have had are lost due to behavior tied to anxiety and emotion. While they couldn't control what they were observing, what they were observing was controlling them. 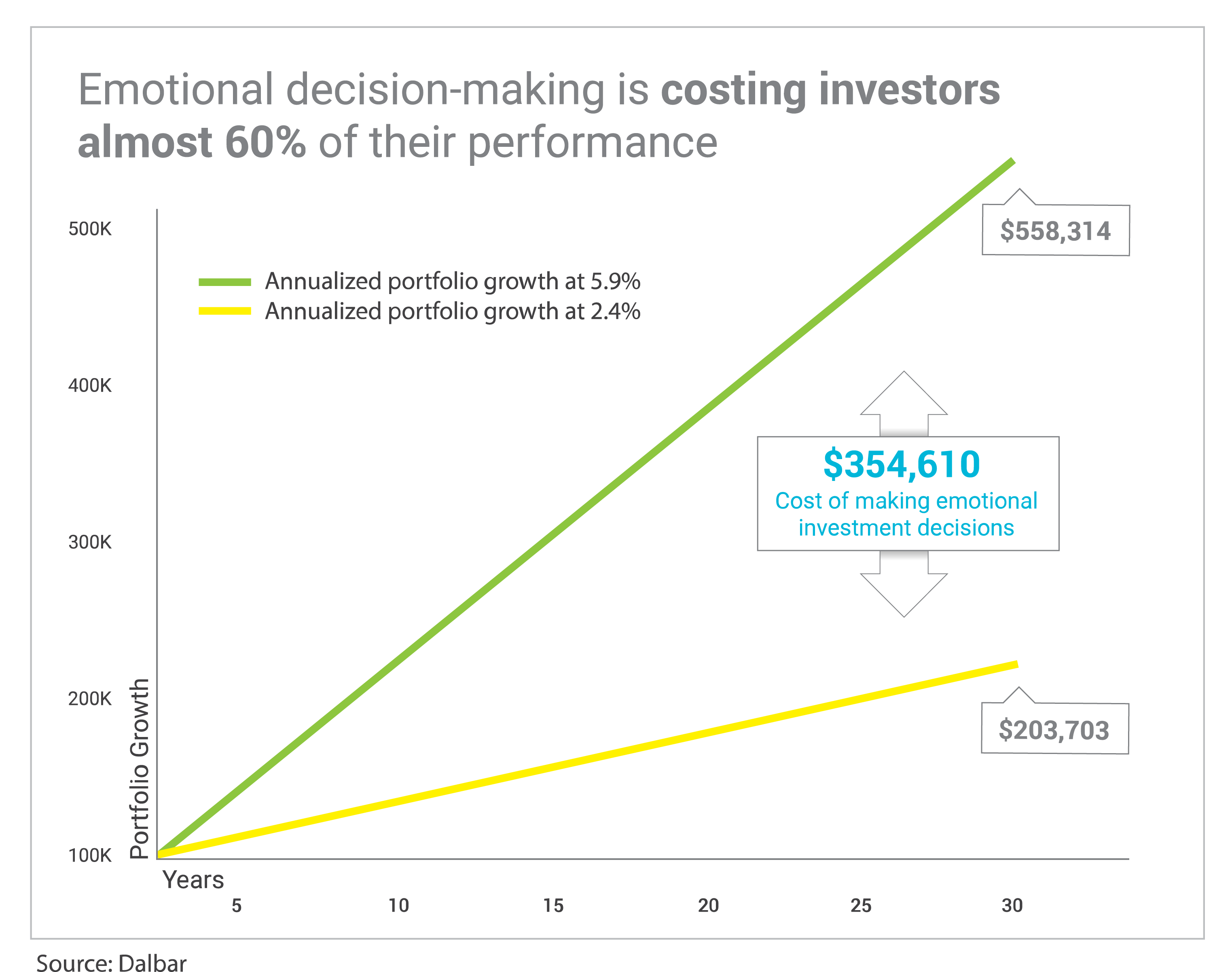 That's what I hope for people - that they'll reduce the financial news and background static, and accept what cannot be controlled. By doing so, they'll feel better and their investment returns will likely improve over time.