4 behavioral traits that a great investor must have

A copy of the Wall Street Journal was lying on the doorstep to my office building this morning. The front page headline: "As stocks surge, investors borrow against holdings." In other words, investors are borrowing on margin as stocks hit highs. I shook my head - it's almost as if humans are programmed not to make money. While margin in general is a bad idea, if you were going to borrow, the time to do it was March of 2009.

Before we get to the main topic, a note. I am being audited by the IRS on a personal level. It's a random selection, and it's only slightly less fun than the toilet bowl swirly I got in 3rd grade. It's an engaging process where everyone else talks about what is on Netflix while you pour through dusty papers at midnight in the basement. But let's look on the bright side. There are two things you can learn from my clerical pain and suffering:

1. On all of your financial accounts, don't turn off paper statements. If there is a small fee for paper, pay it. If you get audited, having paper is critical.

2. Don't push the line on your taxes. I have always been conservative on a tax basis, and during an audit that feels good.

One benefit of all of this is that I decided on an epitaph for my tombstone, which will be "If the IRS has a problem, they can let me know."

The Wall St Journal headline inspired me to write about behavior this week. There are four behavioral traits an excellent investor needs, and normal people generally don't possess all of them, because they can be contrary to each other.

1. Skepticism. You aren't going to make money in finance if you aren't skeptical. The vast majority of what is sold in the financial industry is sub-par, products designed to make financiers wealthy while you keep working hard, plowing money in every day. They are marketed with nice photos of relatively-well off, silver-haired couples sitting around tables with advisors, or looking out over beach sunsets drinking lattes. But you need the default assumption in finance that the other guy or gal is trying to take advantage of you, even if they let you out-drive them on the golf course. That sounds negative, but it is simply how this industry has developed.

A skeptical streak will lead an investor to look at numbers. Finance is a numerical industry, and at some level, with enough digging, the numbers can be found and truth uncovered.

2. Optimistic. You probably don't know a lot of skeptical, optimistic people. If you do, you might want to reconsider your friend selection, because it's a seriously strange combo. But the problem a lot of skeptical investors have is that they are pessimistic. The news media loves pessimism, as it sounds intelligent, and it registers with the fact, that, on average, people prefer 2 to 1 not to lose money versus sacrificing gains.

Pessimism leads people to bet against innovation and markets, or sit on the sidelines, often in cash. The opportunity cost is massive long term. For example, from the late 1970's to today, real estate indexes in the U.S. are up by a *factor* of approximately 75, dividends reinvested. That is a factor, not a percent.

There is a popular newsletter in finance titled "The Gloom, Boom, and Doom Report." I understand the "Gloom" and "Doom," but the "Boom," what does that mean? Is that a reference to a nuclear mushroom cloud? Anyway, the fact that this newsletter is popular is evidence of the problem.

As an investor, the wind is at your back if you are optimistic.

3. Importance. For the past five years or so I have been trying to teach myself to think more like the Google algorithm. That is, to weigh inputs not according to how recently I heard them, or how many or loudly I hear them, but by how much accuracy that input has displayed in the past. "Input" here is a dorky way to say what I read or hear. This has been a difficult exercise and luckily I early on made the decision that everything my wife said got the top algorithmic weighting by default.

Knowing what matters is critical. Here's an example. We do all kinds of work juggling IRAs and Roths for clients, because it feels good for them. We do it for ourselves too. But Warren Buffett did not become Warren Buffett because he set up a Roth IRA and contributed diligently. We know what really matters is our rebalancer model, asset allocation, behavior, and fees, and the interplay among those items. Behind the scenes we have intense focus on those areas, because that's where the real money is made.

4. Long Term thinking. We'll forgive you if you haven't been following the progress of the Clock of the Long Now. It is yet another unusual project from a one Mr. Jeffrey P. Bezos, but in conjunction with The Long Now Foundation it's encouraging people to think longer term. Some of you, unlike me, did not take Tuck Everlasting seriously in 6th grade and are not planning to live for 10,000 years (that's going to mean a lot of IRS audits, maybe I should rethink), and do not want that as an end date for your investments. But the point in investing is daily, monthly, and even most yearly movements are just statistical noise. You have to move your horizon out farther so decisions can be made based on academic research and historical analysis, not emotion or news.

Here's what can happen to short-termers. If you trade in and out of the markets, and miss just the top 10 days of the year, you could lose almost half of your returns (never mind the big tax penalty): 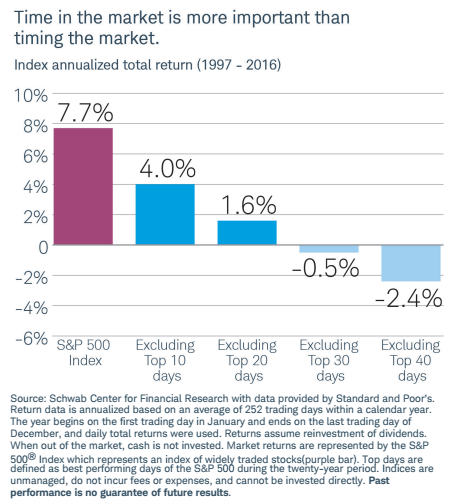