On point today is the idea of optimism in investing, and not timing the markets. My depressing talk of mushroom clouds on the horizon in the last newsletter perhaps gave the wrong message. Since 1776, betting against the United States, or any country that embraces free-market capitalism, has been a terrible error. For example, during the 20th century the Dow advanced from 66 to 11,497, or a 17,320% gain, and that did not include the 45% of returns, per year, attributed to dividends.

"For reasons I have never understood, people like to hear that the world is going to hell," historian Deirde McCloseky told the New York Times in January 2016. And "Despite the record of things getting better for most people most of the time, pessimism isn't just more common than optimism, it also sounds smarter. It's intellectually captivating, and paid more attention to than the optimist who is often viewed as an oblivious sucker," Morgan Housel. People don't perceive market cheerleaders to be particularly bright.

Here in Vermont, in the crash of 2008-2009, the Burlington Free Press put the news on the front page six times. In the massive recovery that followed, I have not seen it mentioned once. An investor lost *far* more money being out of the market than lost riding the crash all the way down.

And today, bloggers and prognosticators, when they can catch their breath from selling their books and subscriptions, are hugely pessimistic.

So how is that working out? 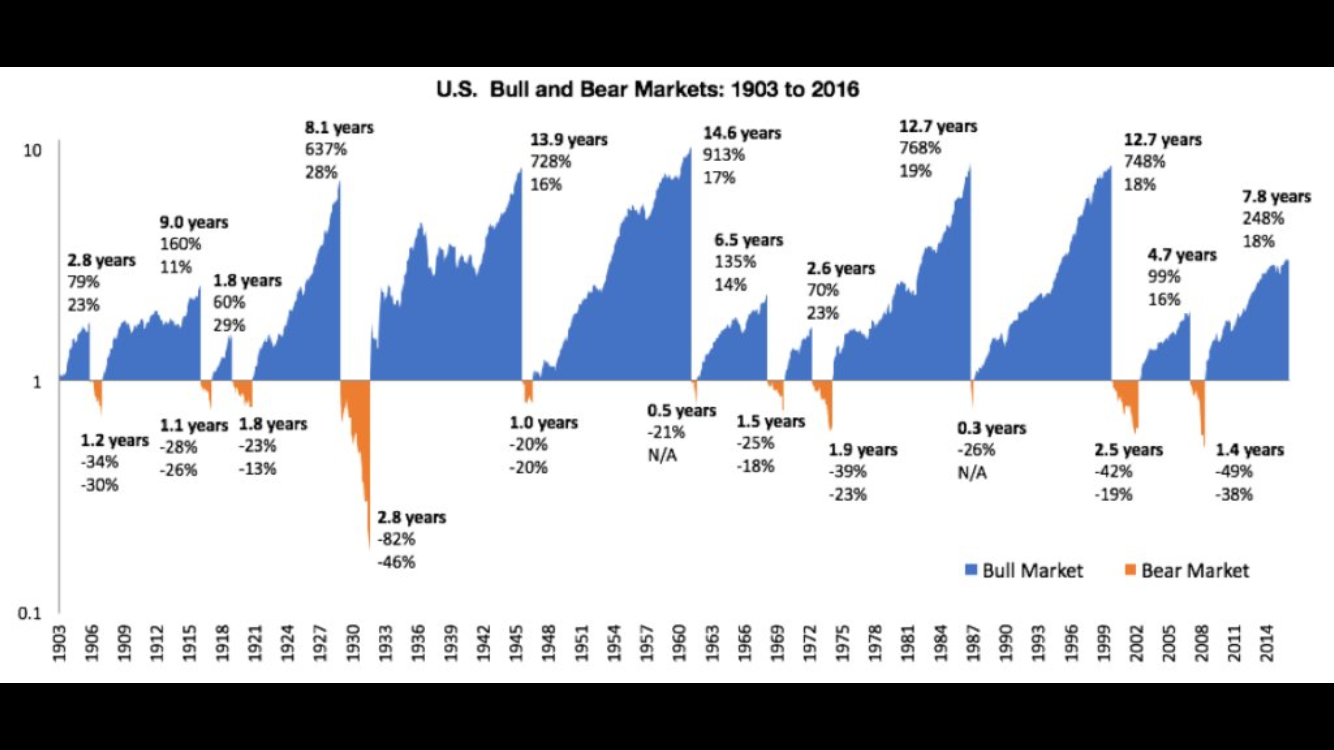 Why, given the long and compelling case to the opposite, do so many people bet against this? It falls into the category of behavioral error in investing, and it is powerful psychologically. What happens is that people blend their thoughts on something else that they feel emotional about with their investment outlook (like politics). This is often reinforced by a pessimist in the media who "sounds smart." The human mind is not good at strict compartmentalizing, and starts to bleed these thoughts together.

The error is compounded by the perception that they have some insight others do not, and that they will be able to predict markets and enhance their future with this insight, like selling out before a market crash or timing a buy at the bottom. These are common errors. This is called market timing.

There is no academic research I have ever found that shows that market timing works reliably. It is complete fiction that the financial media use to generate interest, and has lost American investors gargantuan sums of money. Burton Malkiel at Princeton lit up the literary world with his colorful conclusion on page 5 of his 2003 paper: "Moreover, the evidence is overwhelming that whatever anomalous behavior of stock prices may exist, it does not create a portfolio trading opportunity that enables investors to earn extraordinary risk adjusted returns."

Let me use a real-world example of what you are up against if you try to time markets. Computer scientists at hedge funds now locate servers right near the buildings that house the Food & Drug Administration's servers. They scan every document in real time, looking for the government to change a word somewhere in a document that has meaning. Natural language processors "read" the words and determine the impact on stocks, and trade the markets, all within a fraction of a second. Sophisticated algorithms mix many more inputs into the decision. This has gone well beyond "having a hunch."

One Day In July portfolios lean heavily toward optimism, with exceptions made at the direction of clients or specific situations. And we don't engage in market timing.

How We Are Different
Low-fee index funds. Transparent & fiduciary financial advisors.
Local Financial Advisor
We are in your community. We are local.
Investment Management
We tailor to each client. Index funds at the core.
Index Funds
Broad market exposure, low expense.
Dan's Corner
Meaningful musings from our founder.
Fiduciary
Your best interests are our priority.
Low Fees
Our fees are among the lowest in the nation.
Financial Planner
Financial advisor optimizes your financial picture.
U.S. Treasury Bonds
Use Treasury Bonds to reduce risk.
Book Recommendations
Here are some of our favorites.
Inflation
What is inflation, and what causes inflation.
When Should I Invest?
Life transitions = important financial decisions.
Retirement: 401k and More
Retiring? Plan the future you want.
IRA Rollovers
401k Rollovers. IRA Rollovers
Active vs. Passive Investing
We believe there is a winner in this debate.
The Investment Process
How we work: low-cost index funds, personalized attention.
Simplicity
Simplicity is the ultimate sophistication.
Investing: What to Focus On
Low-fee index funds. fee-only advisor.
Switching Financial Advisors
Can be uncomfortable, but an important step.
Advisor Recruiting
We attract top-tier talent. Not your usual firm.
Basic Investing
Let's start with Investing 101.
Understanding Your Financial Statement
Let's break it down to basics.
Taxes on Investments
What causes taxes within your investments?
Behavioral Economics
The less emotion, the better.
Timing the Market in 2020
2020 - a case study in the futility of market timing.
How Financial Firms Bill
Fee-based vs. fee-only, and lots more.
Who Supports Indexing?
Bogle, Swensen, Buffett, and others.
Transparency
One click to see our fees.
Mutual Funds vs ETFs
Clarifying the difference.
Does Stock Picking Work?
The research says no.
Countering Arguments Against Index Funds
What happens in a down market?
Annuities
Lots of fees, little clarity.
How Do Mutual Funds Work?
Invest in the basket.
How to Relieve Financial Stress
New client? anxiety is normal.
Financial Terms Glossary
Common investment terms you should know.
Firm Comparison
One Day In July vs the competition.
Retirement Investing
Retiring? Let us help.
Accounts We Manage
We manage a wide range of investment account types.
Pay Yourself First
Saving and Investing for the future.
Investing an Inheritance
Prioritizing and planning for the future.
Frequently Asked Questions
Good questions, real answers.
Women and Investing
Your voice needs to be heard. We are listening.
For the Business Owner
Choosing what's best for your business.
Environmental Investing
Carbon intensity, fossil fuels.