The lessons of Puerto Rico, and an example of the fee machine of active funds

Famously saying "More money has been lost chasing yield than at the point of a gun," Devoe, a financial writer, decades ago warned investors not to stretch their bond safety for a little more interest. Active mutual fund managers in the U.S. ignored him and bought the debt of Puerto Rico, a territory which just slid into bankruptcy. This week the Wall St Journal revealed that the losses of these active mutual funds are exceeding $5.4 billion in investor money, in what was supposed to be a safe position.

The investors didn't get the upside of the risk, but they got the downside. The fund managers, of course, got paid their fees regardless.

There is a reason we use the United States Treasury for safe positions. Its chance of default is extremely small.

One other news follow-up. As mentioned last email, the Berkshire Hathaway annual meeting was at the beginning of May. I want to point something out that the media is missing. Buffett has been a great teacher for the past 15 years, but his returns have been, well, exactly mediocre. You now have to go back more than 15 years for Buffett to beat the S&P 500.

In fairness to him, he predicted this result. I was at the Berkshire annual meeting in Omaha, Nebraska in 2002 and I remember him making this point.

It's not for lack of talent, it's that he is running enormous sums of money, and he is starting to resemble an index himself. The problem is that Berkshire doesn't pay dividends, and at 42% of returns, dividends matter. Once you compound those dividends that the index pays back into the S&P 500, the effect is enormous. Here is a graph for you, which starts in the summer of 2002: 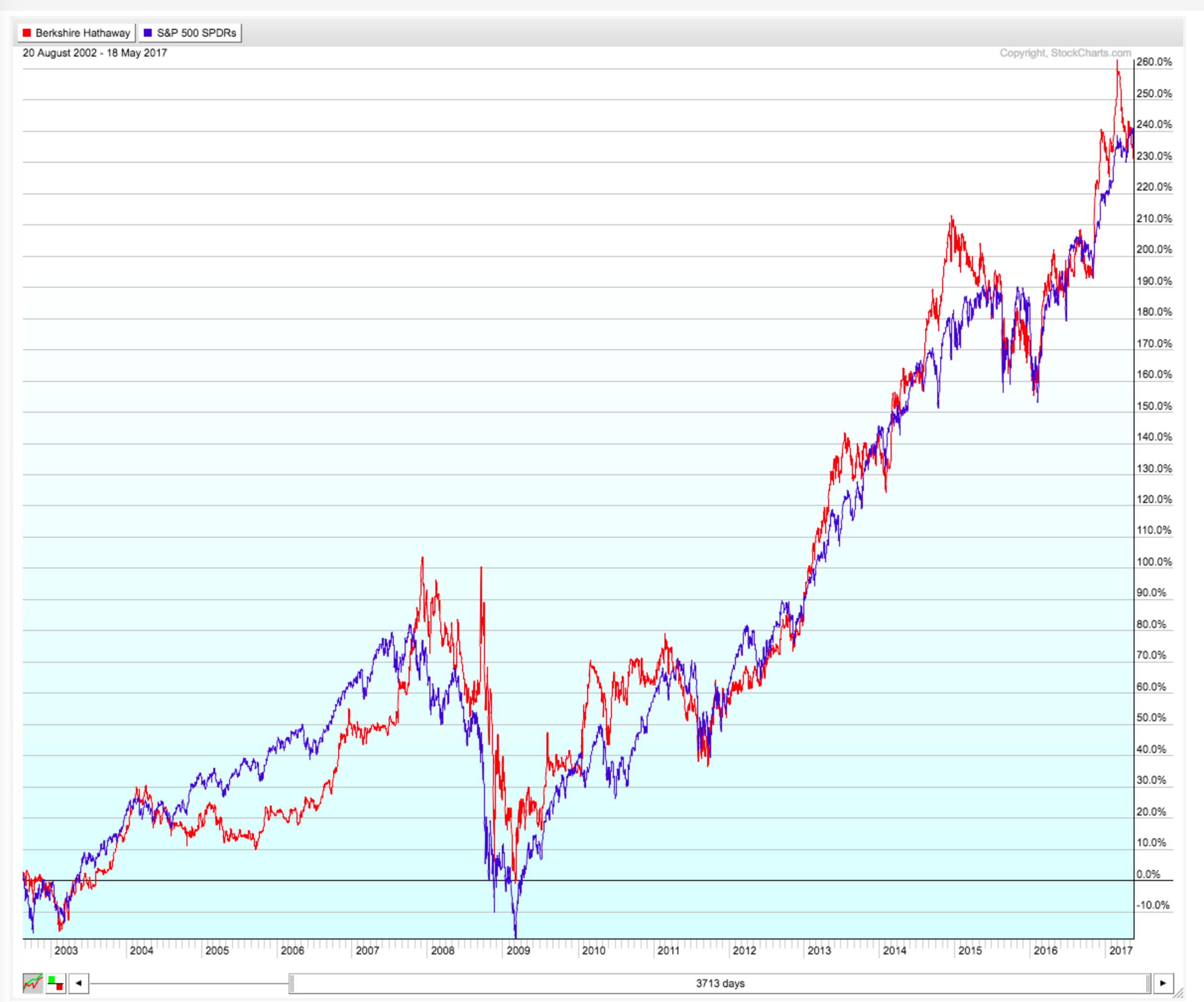 That being said, his teaching has been wonderful, and his new campaign to promote index funds, which seems to have reached every corner of America this month, is appreciated.

New clients often ask how they can understand the fees in the funds they own. The best course would be to get a PhD in obfuscation reduction, but barring that, it is difficult in the United States - you have to read pages and pages of fine print and build up a spreadsheet. The actual transactions of the fund fees are close to invisible when they occur, the money just disappears out of the fund.

However, I believe the Canadian disclosure laws might be different, and require the funds to present the fees in a clear manner. So I dug up a mutual fund from a Canadian financial company that is marketed to U.S. investors. Look at this beauty. I put little green arrows on it to point out some of the most egregious fees. 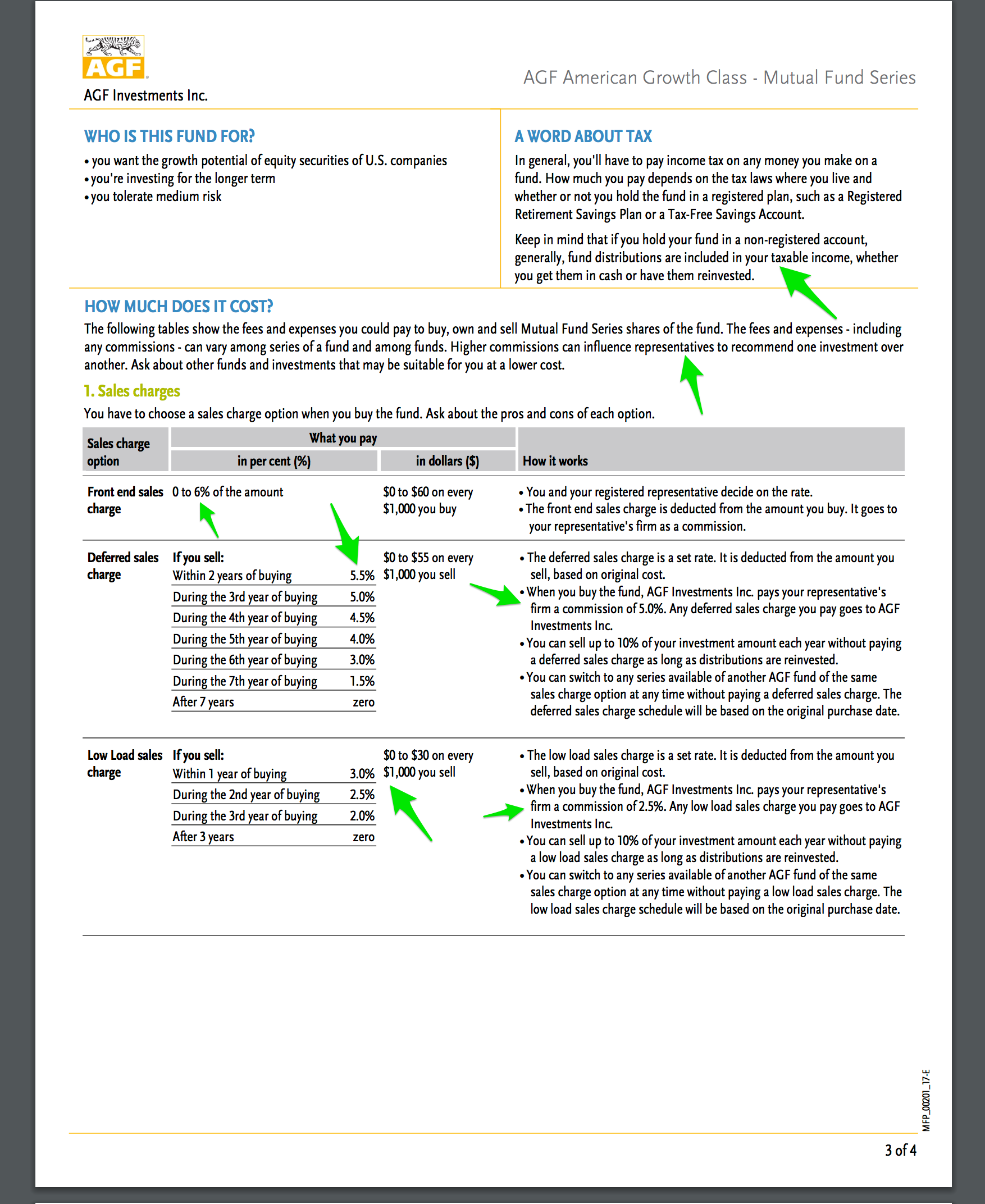 One of my favorite statements in the document is where it says you should look around to buy something else that is "more suitable for you at a lower cost." I'm sure the lawyers didn't put that one in voluntarily. I also love how it says the investor and advisor or broker together decide on the front end sales charge. Somehow I doubt that happens.

But if you thought that was all, silly you. That was just page one. Here's the next page: 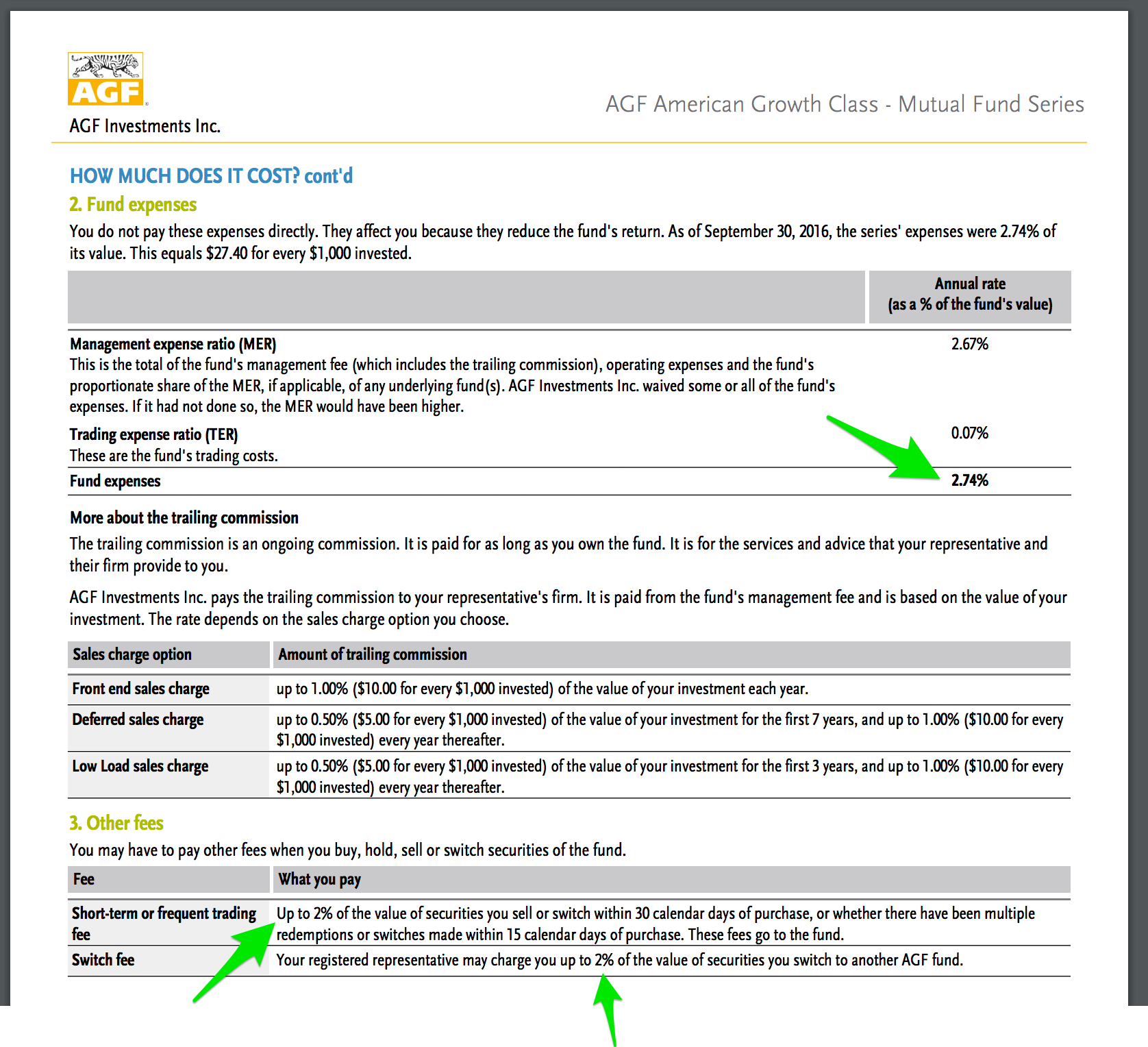 To put this in perspective, it would take some of the funds in the One Day In July model over 500 years to bill the same fee level that this fund will bill in year one. 500 years ago Christopher Columbus had recently docked his boats in Spain and knights were running around pointing lances at their friends on the weekends.

Keep in mind that this is not an isolated example. These funds are everywhere, and they dominate Americans' investments.

Return to Articles
How We Are Different
Low-fee index funds. Transparent & fiduciary financial advisors.
Local Financial Advisor
We are in your community. We are local.
Investment Management
We tailor to each client. Index funds at the core.
Index Funds
Broad market exposure, low expense.
Dan's Corner
Meaningful musings from our founder.
Fiduciary
Your best interests are our priority.
Low Fees
Our fees are among the lowest in the nation.
Financial Planner
Financial advisor optimizes your financial picture.
U.S. Treasury Bonds
Use Treasury Bonds to reduce risk.
Book Recommendations
Here are some of our favorites.
Inflation
What is inflation, and what cuases inflation.
When Should I Invest?
Life transitions = important financial decisions.
Retirement: 401k and More
Retiring? Plan the future you want.
IRA Rollovers
401k Rollovers. IRA Rollovers
Active vs. Passive Investing
We believe there is a winner in this debate.
The Investment Process
How we work: low-cost index funds, personalized attention.
Simplicity
Simplicity is the ultimate sophistication.
Investing: What to Focus On
Low-fee index funds. fee-only advisor.
Switching Financial Advisors
Can be uncomfortable, but an important step.
Advisor Recruiting
We attract top-tier talent. Not your usual firm.
Basic Investing
Let's start with Investing 101.
Understanding Your Financial Statement
Let's break it down to basics.
Taxes on Investments
What causes taxes within your investments?
Behavioral Economics
The less emotion, the better.
Timing the Market in 2020
2020 - a case study in the futility of market timing.
How Financial Firms Bill
Fee-based vs. fee-only, and lots more.
Who Supports Indexing?
Bogle, Swensen, Buffett, and others.
Transparency
One click to see our fees.
Mutual Funds vs ETFs
Clarifying the difference.
Does Stock Picking Work?
The research says no.
Countering Arguments Against Index Funds
What happens in a down market?
Annuities
Lots of fees, little clarity.
How Do Mutual Funds Work?
Invest in the basket.
How to Relieve Financial Stress
New client? anxiety is normal.
Financial Terms Glossary
Common investment terms you should know.
Firm Comparison
One Day In July vs the competition.
Retired Investing
Retiring? Let us help.
Accounts We Manage
We manage a wide range of investment account types.
High Net Worth Investors
Preserve and grow your wealth.
Investing an Inheritance
Prioritizing and planning for the future.
Frequently Asked Questions
Good questions, real answers.
Female Investors
Your voice needs to be heard. We are listening.
For the Business Owner
Choosing what's best for your business.
Environmental Investing
Carbon intensity, fossil fuels.