Historically, bonds have played two primary roles in balanced investment portfolios. They have generally paid a higher level of current income than stocks, making them the go-to vehicle for those in need of current income. Additionally, they have provided a level of stability to portfolios due to their structure and relative safety (perceived and real). After a decades-long decline in interest rates, exacerbated by the global central bank response to the recent coronavirus pandemic, the income advantage of bonds has been significantly eroded (Exhibit 1). We believe however, there is still a substantial role to be played by bonds in your portfolio, particularly those issued by the United States Treasury. We are using U.S. Treasury bonds to reduce risk.

In aggregate, the price volatility of the bond market has been significantly less than the price volatility of the stock market over time. This is primarily because bonds represent debt on the issuing entity’s balance sheet, and debts generally get repaid (more on that later). When you purchase a bond, you receive interest at the bond’s stated coupon rate until you either sell it or it reaches maturity, at which time you are repaid the principal. If your bond has a fixed coupon, and market interest rates increase while you own your bond, the price of your bond declines. This occurs because your bond’s coupon is now less valuable relative to current market rates, and a prospective buyer of the bond would demand a lower purchase price to make up for that loss in value. The reverse is also true when market rates decline (i.e. the price of your bond will increase), which is why BOND PRICES MOVE INVERSELY RELATIVE TO INTEREST RATES! Different types of bonds have different embedded risks however, so they don’t all react to changes in interest rates with the same magnitude.

A bond’s risk can fall into several categories (maturity, credit, liquidity, etc.). Credit risk is a measure of a borrower’s likelihood of timely debt service payments of both the periodic coupon (interest) and ultimate return of principal at maturity. Most bonds carry a credit rating issued by one or more independent agencies which helps investors to understand the degree of credit risk associated with the bond. Rating scales are letter-based, with a “AAA” rating signifying the highest grade, “AA” the next highest grade, and so on.

U.S. Treasury bonds are generally believed to be of the highest credit quality, being backed by the full faith and credit of the U.S. government. On the other end of the credit spectrum are high yield (aka junk) bonds issued by low rated (BB and below) companies. Everything else equal, yields across the credit spectrum are generally highly correlated with rating. The higher the rating, the lower the yield and vice versa. This reflects the need for investors to be compensated for taking on the additional credit risk associated with lower-rated issuers.


Some Bonds May Reduce Risk Less than Investors Think

As interest rates have declined, particularly since the financial crisis, there has been an ongoing stretch for yield among income-oriented investors, leading to increasing amounts of investment dollars allocated to corporate bonds and the lower rated credit sectors.1 The benign market environment since the financial crisis has generally rewarded this strategy, but the more recent market turmoil has revealed this strategy’s weakness. The results below present evidence of this outcome.

We analyzed monthly total rate of return (TRR) data for several Blackrock exchange-traded funds (ETFs) that represent the major fixed income sectors. Our objective was to determine each ETF’s level of return correlation with the broad equity market. We used the IVV ETF, which tracks the S&P 500 index, as a proxy for the equity market.

Each fixed income ETF and a brief description of its sector representation is listed here in descending order of credit quality:

We compiled monthly TRRs for each of these ETFs for the period October 2007 (the earliest point at which returns were available for all of the ETFs) to March 2020 and calculated how correlated those returns were with the returns for stocks. This period includes the financial crisis and resulting market crash, as well as the long recovery period we have enjoyed for most of the last ten years. Most recently, the stock market has corrected rather violently again as a result of the coronavirus pandemic. Therefore, we feel the period measured represents a full market cycle.

The correlations for the entire period are shown below: 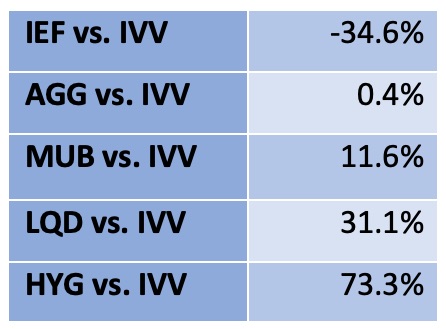 A positive percentage indicates positive correlation with stocks, and the larger the number, the greater the correlation. A negative number indicates that asset class actually moves in the opposite direction relative to stocks. The outcomes in the table are fairly intuitive. U.S. Treasuries, as the safe haven asset class, typically move in the opposite direction from stocks, deemed the riskiest of the asset classes we measured. Conversely, the high yield market moves directionally with stocks, which again seems intuitive since junk bonds represent the riskier end of the corporate debt market.


Using U.S. Treasury Bonds to Reduce Risk When It Matters Most

Given the extremes of recent market volatility, we decided to take our analysis a step further. We wanted to see how these correlations might shift during periods when stocks were doing either really well or very poorly. During the same measurement period (May 2007-March 2020) we analyzed correlations for only those months where the equity market TRR exceeded +5% or was worse than -5%. There were 18 months of each during the period, and these are the resulting returns correlations for those 36 months: 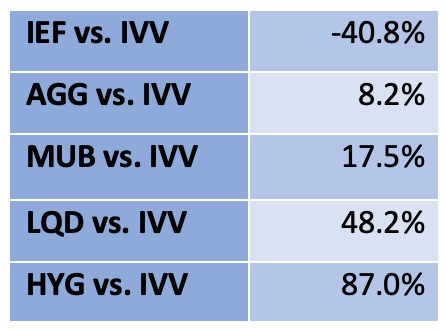 As can be seen from these numbers, during periods of extreme volatility in the market, all the positive correlations increased still further, and the negative correlations were more negative. Interestingly, in both sets of analysis, AGG (representing the broad investment grade bond market) was slightly positively correlated with stocks. Although this portfolio is roughly 70% allocated to bonds either explicitly or implicitly backed by the US government, there are sufficient other exposures in the portfolio to end with a neutral correlation with stocks. So what does this tell us, and how should it inform portfolio construction and the hedging of equity exposures in a balanced portfolio?

The quest for yield is a natural one, but it comes with a cost. Many individuals have bonds in their portfolios, including municipals, which they believe will provide stability to the overall portfolio if/when stocks go through a correction phase. However, as any form of credit risk is introduced, correlation to stocks increases, sometimes dramatically. As fund managers have stretched to increase advertised yields on their bond portfolios, they have increasingly turned to various forms of credit risk. These risks include the aforementioned investment-grade and high yield corporate bonds, as well as leveraged bank loans, collateralized loan obligations (CLOs), and lower rated municipal credits. As our correlation study shows, the higher the credit risk, the more likely a bond will go down when stocks go down, potentially compounding the negative returns experienced during the correction phase. In other words, the diversification and risk-reducing benefits received from these types of bonds tend to decline materially or even disappear at the exact time they are needed the most.


U.S. Treasury Bonds Have Provided a Cushion in the 2020 Bear Market

Even the investment grade market and municipal bonds are not much help during the most difficult market periods, as the chart below demonstrates. Exhibit 2 plots the year-to-date price performance of the five ETFs in our correlation study, plus IVV as proxy for the stock market. This is admittedly a very brief time period, but it is the environment we are dealing with today (evidenced by extreme volatility). As indicated earlier, bond prices move inversely relative to interest rates, but they don’t all move with equivalent magnitude. Further, if enough credit risk is added to a bond portfolio, this risk may partially or fully offset the benefits received from falling interest rates during extreme market events.

As has generally been the case in prior periods of volatility, using U.S. Treasury bonds to reduce risk has been an effective strategy during the most recent selloff in stocks. Interest rates are now at historical lows, which leads to the concern of how much lower rates can go and how much that might limit price upside for Treasuries going forward. While we do not forecast a particular future path for interest rates in the US, we do believe there is capacity for interest rates to move still lower than they are today. Several large, developed economies (Japan, Germany and France most notably) are issuing their debt at negative interest rates (That’s right, their creditors are paying them interest!), opening up the potential for rates in the US to follow a similar path. Only time will tell of course…

One Day In July LLC

How We Are Different
Low-fee index funds. Transparent & fiduciary financial advisors.
Local Financial Advisor
We are in your community. We are local.
Investment Management
We tailor to each client. Index funds at the core.
Index Funds
Broad market exposure, low expense.
Dan's Corner
Meaningful musings from our founder.
Fiduciary
Your best interests are our priority.
Low Fees
Our fees are among the lowest in the nation.
Financial Planner
Financial advisor optimizes your financial picture.
U.S. Treasury Bonds
Use Treasury Bonds to reduce risk.
Book Recommendations
Here are some of our favorites
Who We Serve
We work with clients nationwide from all financial backgrounds.
When Should I Invest?
Life transitions = important financial decisions.
Retirement: 401k and More
Retiring? Plan the future you want.
IRA Rollovers
401k Rollovers. IRA Rollovers
Active vs. Passive Investing
We believe there is a winner in this debate.
The Investment Process
How we work: low-cost index funds, personalized attention.
Simplicity
Simplicity is the ultimate sophistication.
Investing: What to Focus On
Low-fee index funds. fee-only advisor.
Switching Financial Advisors
Can be uncomfortable, but an important step.
Advisor Recruiting
We attract top-tier talent. Not your usual firm.
Basic Investing
Let's start with Investing 101.
Understanding Your Financial Statement
Let's break it down to basics.
Taxes on Investments
What causes taxes within your investments?
Behavioral Economics
The less emotion, the better.
Timing the Market in 2020
2020 - a case study in the futility of market timing.
How Financial Firms Bill
Fee-based vs. fee-only, and lots more.
Who Supports Indexing?
Bogle, Swensen, Buffett, and others.
Transparency
One click to see our fees.
Mutual Funds vs ETFs
Clarifying the difference.
Does Stock Picking Work?
The research says no.
Countering Arguments Against Index Funds
What happens in a down market?
Annuities
Lots of fees, little clarity.
How Do Mutual Funds Work?
Invest in the basket.
How to Relieve Financial Stress
New client? anxiety is normal.
Financial Terms Glossary
Common investment terms you should know.
Firm Comparison
One Day In July vs the competition.
Retired Investing
Retiring? Let us help.
Accounts We Manage
We manage a wide range of investment account types.
High Net Worth Investors
Preserve and grow your wealth.
Investing an Inheritance
Prioritizing and planning for the future.
Frequently Asked Questions
Good questions, real answers.
Female Investors
Your voice needs to be heard. We are listening.
For the Business Owner
Choosing what's best for your business.
Environmental Investing
Carbon intensity, fossil fuels.