Looking back at our year-end letter from 2020, we opened with a brief discussion of the onset and evolution of the COVID pandemic. At that time, there was good news with regard to the pending deployment of new vaccines to combat the virus. Further, fiscal and monetary stimulus measures remained in place and had largely offset what could have been a very negative economic story globally. Those reasons (and more) were cause for optimism at the time. As 2021 unfolded, the employment picture continued to improve, ultimately getting back to pre-pandemic levels as measured by the unemployment rate. Year-over-year GDP growth rates were spectacular by historical standards during the last three quarters of the year due to easy comparisons with the initial quarters following COVID’s onset. Nominal GDP finally exceeded pre-pandemic levels early in 2021 as well. These factors helped equity valuations to surge for a third straight year, with the Russell 3000 registering a total rate of return for the 2021 calendar year of 25.6%.

However, it is worth noting that a large majority of that return was garnered in the first eight months of the year. The landscape became much more volatile and uncertain in the last four months of 2021, and that environment has persisted into early 2022. In fact, in the 4+ months between September 1st and the date of this letter, the Russell 3000 index return has actually been negative.

There are several drivers of the change in tone. Some of the above-mentioned improvement in the unemployment rate was due to people dropping out of the workforce. About 4 million fewer people were working in the U.S. at the end of 2021 relative to pre-pandemic levels. Although pundits debate the causes for this decline (lack of affordable childcare, boredom with or distaste for the prior job, early retirement, health concerns, etc.), the effects have been quite noticeable. Service, hospitality, and transportation industries have had a very difficult time staffing to meet demand, in some cases resulting in reduced profits or even closure. Transportation bottlenecks have disrupted supply chains still further, resulting in a scarcity of products reaching the end consumer. The labor shortages have led to higher wages. This, combined with the supply chain issues and a loose monetary and fiscal policy environment, has resulted in elevated consumer prices. The Federal Reserve initially believed these inflationary pressures would be transitory. However, they now appear more systemic, and the Fed is reflecting that belief by starting to remove the extreme monetary accommodation that has been in place since the start of the pandemic.

As already mentioned, the domestic equity markets did quite well last year as the risk-on trade dominated for much of the year. Non-U.S. equities did not fare as well, with developed economy equities (using Vanguard’s VEA ETF as proxy) up 11.67%, and emerging economy equities (VWO) up a paltry 1.30%. We will discuss this more below, but there is no question that the U.S. market was the clear winner for calendar year 2021. Interest rates were mildly higher last year, with the broad U.S. investment grade bond market (AGG) registering a slightly negative total return of -1.77%. However, more important than this look back is what comes next!

Obviously, we are still dealing with a difficult pandemic as the virus mutates and vaccination rates vary by region, by choice, or by availability/access. The Omicron variant has proven to be highly infectious (although somewhat less onerous from a severity standpoint) and as a result, various regions, sectors, and companies are altering the ways they operate. It seems likely to us that this virus will continue to mutate, with solutions or responses to those mutations currently unknown. Uncertainty can lead to heightened volatility, which in turn can negatively affect asset prices.

Another potential headwind we think worth mentioning is the situation in China. There are two facets in particular we think are important. One is the increasing tension with its neighbors and with the U.S., as well as ongoing assertions regarding Taiwan “ownership.” We hope and believe the chances of armed conflict with China are remote. That said, the possibility has received increasing attention in the press and from our peers, and we believe it should not be ruled out as a possible “black swan” event in the year(s) ahead. Just this morning (Jan. 20) China is claiming to have driven one of our Navy’s destroyers from its waters. This comes a day after President Biden, during a lengthy press briefing, addressed tension along the Ukrainian border, threatening Russia with sanctions if they should overstep there. Hopefully, all of this ends up as no more than saber rattling, but we do believe geopolitical risk is sufficiently high to warrant its inclusion in our investment decision making process.

We believe a more immediate concern is the overleveraged Chinese real estate market (roughly 30% of the country’s GDP), the potential for pervasive default/contagion, and the as-yet-unknown “solutions” to be employed by Beijing. The Chinese economy has always been somewhat opaque to outsiders, with information standards lacking relative to its Western counterparts. The immediacy of their real estate issue, and the somewhat mercurial responses to what could end up a rapidly declining situation, are very real causes for concern. Foreign creditors are being treated differently than domestic creditors, developers are being given access to escrow funds on as-yet-uncompleted projects (as of this morning), and lending standards are being lowered to encourage more lending to institutions that are already massively overleveraged. Even with complete transparency, these would be difficult initiatives to tolerate. But given the veil over the entire process, we think investors should be looking elsewhere.

Globally, investors, markets, and economies have lived in an environment of moral hazard (a lack of incentive to guard against risk because one is shielded from its consequences) dating back to the financial crisis. The earlier 2008/9 period, as well as the more recent onset of the COVID pandemic, were met with massive amounts of monetary and fiscal stimulus. This has been true in the U.S., E.U., China, and just about everywhere else. Think of it this way: If anyone entering a casino was reimbursed for their losses on the way out, how much more would they put at risk?!?! To illustrate the point and highlight the result, a recent (11/25/2021) Bloomberg headline reads, “Stock Funds Took in More Cash in 2021 Than Two Decades Combined.” Here is a graph from the article, courtesy of Bank of America: 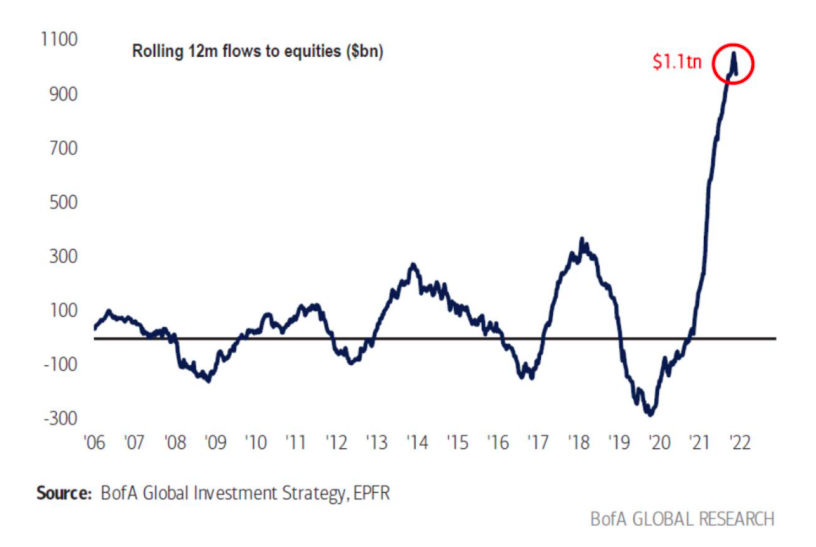 This flow of funds has resulted in broad equity indexes at or near all-time highs, and valuations expressed as P/E ratios at similarly lofty levels compared to historical norms. Other asset classes, such as private equity and high yield bonds, also reflect the flood of easy money pursuing easy returns.

As our readers know, we are not market timers. To this we would add that we believe strongly in the long-term prospects for our domestic equity markets, and acknowledge that equities go up far more often than they go down. That said, we still believe balanced portfolios are a solid solution for investors that want or need to reduce risk, which is why we build a customized asset allocation for each individual or organization, depending on their risk tolerance and where they are on their financial journey.

these valuations could increase still further, and/or persist for some time. However, we believe that there are better opportunities in areas of the market that have not done as well, and that are more reasonably priced. To that end, we have been rebalancing portfolios to increase exposure to U.S. value, U.S. small cap, and the health care sector. Further, in portfolios where we own bonds, we reduced our average maturity and introduced a strategic allocation to short-dated bonds that we believe will be more responsive to future Federal Reserve rate increases. We continue to adhere to investment-grade only on the bond side, with favoritism shown to U.S. Treasuries as the only positive carry asset class that has historically exhibited a negative correlation with equities.