The Impact of Sector Performance on Environmental Portfolios

One important element of environmental investing is understanding the impact that different market conditions can have on the return of an environmentally focused portfolio relative to the returns on other index-based portfolios.

Environmentally focused portfolios reduce or eliminate exposure to certain types of energy-intensive companies (oil companies, utilities, etc.). By definition, that exposure must be replaced by larger allocations to other sectors of the economy that leave a lower carbon footprint. Depending on the portfolio manager’s strategy, these might include technology, financial services, and health care, among others. It follows that return differences among industries can at times have a material impact on the relative performance of environmental mandates.

This dynamic is always at play to some extent, but it becomes more apparent during volatile periods like the first quarter of 2020 or the first half of 2022.

Energy Underperformance in the First Quarter of 2020

While the coronavirus pandemic had a substantial negative impact on every major sector of the U.S. stock market, the effect was felt much more acutely in some. The quarterly returns of Vanguard’s single-sector exchange-traded funds (ETFs) illustrate this point. Vanguard offers a liquid, low-cost ETF for each of the 11 sectors that comprise the S&P 500 index, making the series a good proxy for the return an investor could have achieved by allocating capital to a given sector..

The S&P 500 index, as measured by Vanguard’s S&P 500 ETF (VOO), returned -19.6% in the first quarter of 2020. Of the 11 primary sectors that make up the S&P 500, five performed better than the overall index and six performed worse. As one might expect in light of the extreme change in economic outlook due to the pandemic, the sectors that fared best were those that are generally less sensitive to a downturn in consumer spending (Exhibit 1). 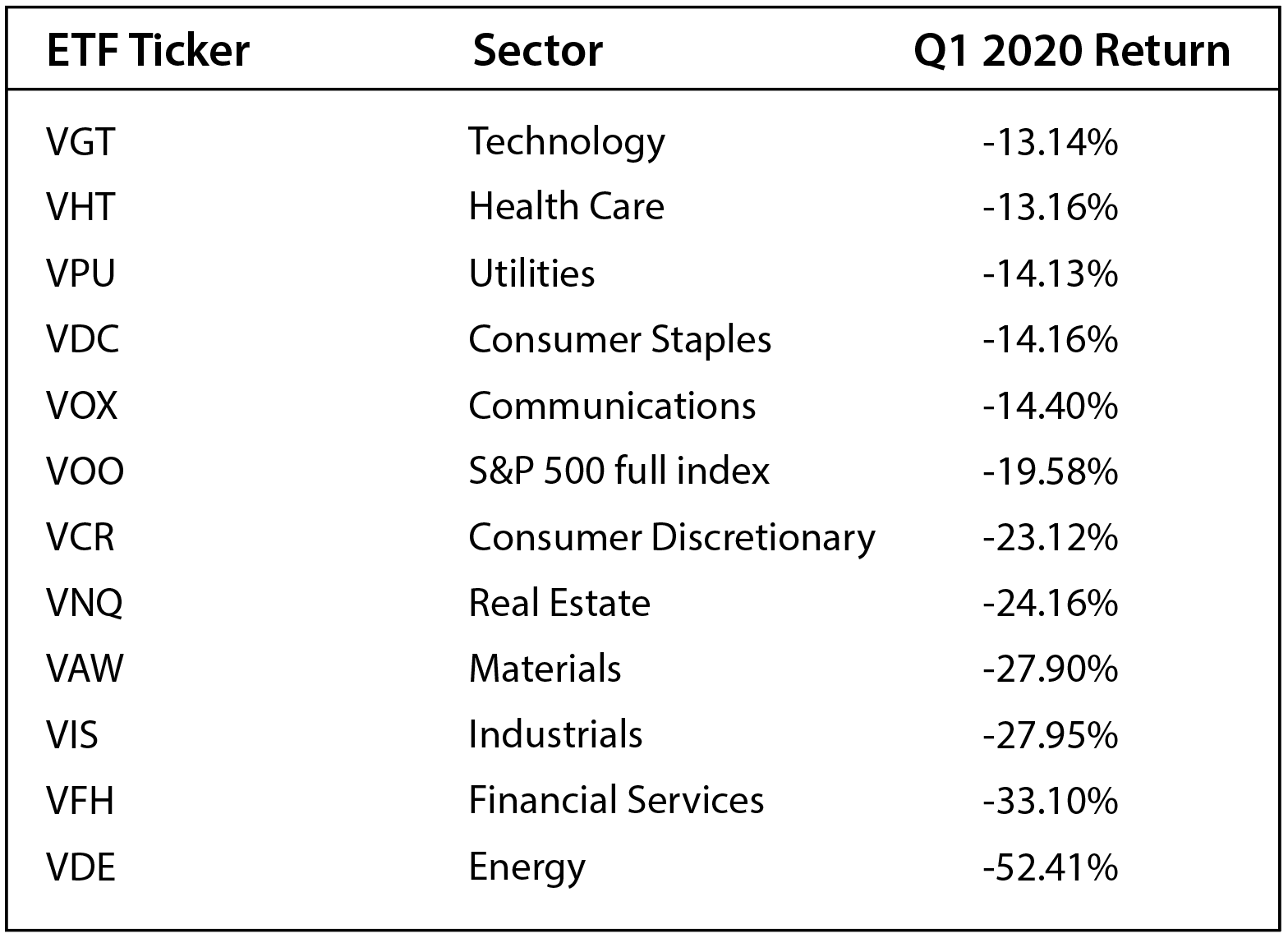 Especially notable was the extremely poor performance of the Energy sector. With the economy essentially shut down and most people spending their days at home, the demand for oil cratered at a time when oil supply was already high. As a result, stock prices of many companies in the sector plummeted, and the Vanguard Energy ETF (VDE) lost more than half of its value in just three months.

On the other hand, Utilities, which are also generally under-represented in environmental mandates due to their high carbon emissions, performed better than average (-14.1%), as measured by the Vanguard Utilities ETF (VPU). The relatively stable demand for power and the sector’s reliable dividend yield help to make Utilities much less sensitive to economic downturns.

For most portfolios with an environmental tilt, the lower allocation to Energy likely resulted in a noticeable positive performance effect relative to broad market portfolios. In fact, given the large degree of underperformance in Energy, allocating those dollars to any combination of other sectors would have boosted returns. As an example, the Vanguard ESG U.S. Stock Index ETF (ESGV), which had less than 0.1% allocated to Energy at quarter-end, outperformed Vanguard’s Total Stock Market ETF (VTI) by 2% in the first quarter and outperformed the S&P 500 by 0.8%.


Energy Outperformance in the First Half of 2022


The first half of 2022, while also volatile, presented a much different set of dynamics. Inflation had replaced the economic shutdown as the focal point of market angst. Excess liquidity, supply chain shortages, and the conflict between Russia and Ukraine combined to put significant upward pressure on energy prices. While challenging for consumers, this backdrop was much more favorable for high-carbon industries, as demonstrated by the Vanguard sector fund returns in Exhibit 2 below.

Not only was Energy the only sector to produce a positive return, it outpaced the broad market by an incredible 50%. In contrast to the experience in 2020, ESGV underperformed VTI by more than 2% and underperformed the S&P 500 by about 4% in the first six months of 2022.

It is difficult to know how long the resurgence of traditional Energy companies will last. The tremendous outperformance in the first half of 2022 still leaves the Energy sector behind the S&P 500 by about 5% annually over the five years ending June 30, 2022. Given the pressures being applied by alternative energy solutions and the global drive to lower emissions, it is challenging to envision a long-term period of dominance for these companies in the future.

Regardless, we can be confident that market dynamics will never be completely stable, and different sectors will lead the market at different times. It is worth remembering this when comparing the performance of an environmentally-focused portfolio to broader benchmarks.

At One Day In July, our approach to constructing environmentally-focused portfolios considers a variety of factors. Among the most important is the desire to reduce exposure to companies with large carbon footprints and to companies with substantial fossil fuel reserves. We accept the fact that this will cause some performance deviations from common market benchmarks, and that those deviations may be positive or negative in the short term. However, we also believe that the net long-term impact of these deviations is more likely to be positive in light of the growing momentum around climate action.

Connect With a One Day In July Financial Advisor Today.